VZV is an alphaherpesvirus, related to herpes simplex viruses types 1 and 2. Its complex name reflects the fact that it causes two diseases, namely chickenpox (varicella) and shingles (herpes zoster).

The VZV particle is fragile and its lipid envelope renders it susceptible to disinfectants containing organic solvents (eg. alcohols). VZV is also susceptible to many other types of disinfectant, including those containing  oxidising agents (such as hypochlorite). Inside the lipid envelope is a  nucleocapsid (protein shell containing viral DNA) comprising 162 capsomeres (building blocks) arranged in a symmetrical pattern. When a VZV particle enters  a cell, the nucleocapsid is transported to the cell nucleus, where the viral  genome is replicated.

The VZV genome is a linear double stranded DNA molecule encoding at least 69 unique genes, 3 of which are present in two copies. Large portions of the genome  share considerable homology with the genomes of HSV-1 and HSV-2. Many genes are well conserved (have similar structure and function) across the  alphaherpesviruses. Virions contain one molecule of linear double stranded DNA.

The relationship between chickenpox and shingles

Chickenpox, which is usually seen in children, is a clinical manifestation of  primary (i.e. first time) infection with VZV. After recovery from primary  infection, VZV is not eliminated from the body but rather, the virus lies dormant (latent), often for decades, in the sensory nervous system.

Latent infection may reactivate, in which case the result is an episode of shingles. This usually happens in older people, perhaps because, with advancing  age, the immune system fails to keep the virus in check. 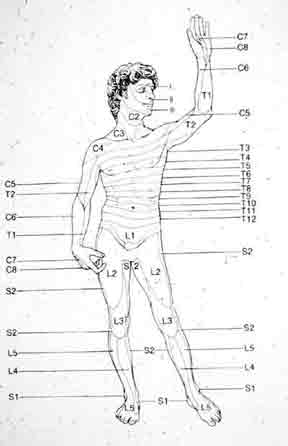 Varicella-Zoster virus, after primary infection, lies dormant in the roots of sensory nerves, in the spinal cord. When the infection is reactivated, it causes  pain and a rash in the area supplied by the affected sensory nerves. These areas are known as dermatomes.

Virions enveloped; slightly pleomorphic; spherical; 120-200 nm in diameter.  Surface projections of envelope small (surface appears rough); spikes; dispersed evenly over all the surface. Nucleocapsids isometric. Nucleocapsid surrounded by  the tegument that consists of globular material which is frequently asymmetrically distributed and may be variable in amount. Nucleocapsids sometimes penetrated by stain (although intact envelope impermeable to stain); 100-110 nm in diameter. Symmetry icosahedral. Nucleocapsids appear to be angular. Surface capsomer arrangement obvious. 162 capsomers per nucleocapsid. Capsomeres hexagonal in cross-section with a hole running half-way down the long axis. Core consists of a fibrillar spool on which the DNA is wrapped. The ends  of the fibers are anchored to the underside of the capsid shell. Incomplete virus particles are often present; they are capsids lacking the envelope.