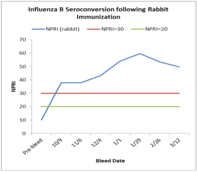 Influenza viruses can be divided into three classes, A, B, and C, largely based upon conserved antigenic differences in the internal nucleoprotein. Influenza A virus, typically encountered more frequently than types B and C, and associated with the majority of serious epidemics, can be further subdivided into strains or subtypes based on antigenic differences in the external hemagglutinin proteins (H1-H18) and neuraminidase proteins (N1-N11).

Historically, human influenza A virus infections have been associated with H1N1, N2N2, and H3N2 subtypes of influenza A, although a 1997 outbreak in Hong Kong was identified as an H5N1 subtype. This outbreak was not only significant because it resulted in multiple human infections and deaths, but it also represented the first known demonstration of avian influenza virus transmission to humans.

Use Discount code 25 for