Human Cytomegalovirus is a herpesvirus of  the betaherpesvirinae subfamily. The members of this subfamily tend to have a restricted host range, slow spread in cell culture and a long growth cycle as compared to Herpes Simplex Virus. CMV infected cells may become enlarged (cytomegalia), showing intranuclear inclusions. Co-survival of cell and virus is often established. Two recently recognized herpes viruses, HHV-6 and HHV-7, also belong to the betaherpesvirinae subfamily.

The virus is found universally throughout all geographic locations and socioeconomic groups and infects between 50 and 85% of adults in the United States by 40 years of age. CMV is also the virus most transmitted to a developing child before birth. The infection is more widespread in developing countries and in areas of lower socioeconomic conditions. For most healthy people who acquire the virus after birth, there are few symptoms and no long-term health consequences. Symptomatic experiences can include a mononucleosis-like syndrome with prolonged fever and a mild hepatitis. Once a person becomes infected, the virus remains viable but usually dormant in that person for life. For the vast majority of people, CMV infections are not a serious problem.

CMV infection is problematic to certain high-risk groups. These groups include (1) the unborn child (neonate) (2) people who work with children and (3) the immunocompromised, such as organ transplant patients and those infected with the human immunodeficiency virus (HIV). Neonates, infected in utero, may present with rashes, hepatitis, gastroenteritis and a range of organ specific maladies. With supportive treatment, most survive. However, in the first few years of life, 80-90% of the survivors will experience complications that may include hearing loss, vision impairment and varying degrees of mental retardation. CMV has also been associated with retinitis and increased mortality in patient groups undergoing immunosuppression due to organ transplant treatment or HIV infection. 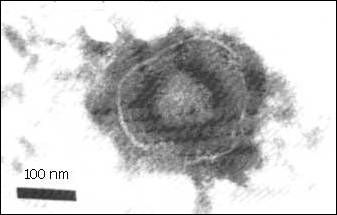 Attachment is rapid and efficient in many cell lines whether permissive or not. Virus grows only in a restricted range of human cells due to a genetic block post-penetration

Thought to fuse directly with plasma membrane. Low pH of endocytosis presents a problem due to pH sensitivity of virus

Gene expression is divided into immediate early (alpha), delayed early (beta) and late (gamma) stages. The alpha stage involves the expression of five regions of the genome that act alone or are synergistic as transactivators and autostimulators. The major early promotor/enhancer is IE1/IE2. Differential splice and transcription events yield various products from the same locus. Some products are early while others are late. The IE1/IE2 gene products act as stimulators and repressors of alpha gene expression, as well as transactivators of beta and gamma gene expression.

The beta stage is defined as transcription events occurring 4 - 24 hours after infection that are unaffected by inhibitors of DNA replication. It is further divided into beta-1 and beta-2 subclasses that are defined as transcription events occurring at 4 - 8 and 8 - 24 hours after infection, respectively. Generally, these events can be related to DNA replication and nucleotide metabolism.

The gamma stage is defined as transcription events occurring 12 - 48 hours after infection that are affected by inhibitors of DNA replication. It is further divided into gamma-1 and gamma-2 subclasses that are defined as transcription events occurring at 12 - 36 and 24 - 48 hours after infection, respectively. These events are related to virus structural and maturation issues.

Most infections with CMV are not diagnosed because the virus produces few, if any, symptoms and tends to reactivate intermittently, also without symptoms. However, persons who have been infected with CMV develop antibodies to the virus and these antibodies persist for a lifetime. A number of tests have been developed to determine if infection has occurred and are widely available. In addition, virus can be cultured from specimens obtained from urine, throat swabs and tissue samples to detect active infection. For best diagnostic results, laboratory tests for CMV antibody should be performed using paired serum samples taken two weeks apart.

Because CMV-specific IgM can be produced in low levels in reactivated CMV infection, its presence is not always an indication of primary infection. Only virus recovered from a target organ, such as the lung, provides unequivocal evidence that the current illness is caused by acquired CMV infection. If antibody tests of paired serum samples show a fourfold rise in IgG antibody and an IgM titer equal or greater than 30% of the IgG titer or if virus is cultured from a urine or throat specimen, the findings indicate an active infection.